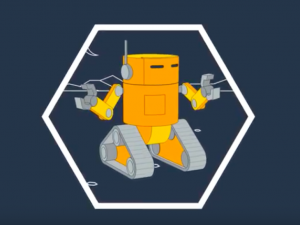 Amazon launched the AWS RoboMaker, a new cloud service that helps in developing, testing and deploying robotics application. This new service was introduced as part of the AWS re:Invent 2018.

We all admit that machine learning(ML) and artificial intelligence(AI) is complex and time-consuming. And to make things easy, Amazon came up with RoboMaker service to accomplish the development of AI-based apps. AWS RoboMaker provides the tools to build robotic applications by extending the Robotics Operating System – ROS (an open source framework) and various other cloud services like AWS machine learning services, monitoring services, and analytics services. You can learn more about RoboMaker at the AWS website in detail.

Imagine if you were asked to develop a bot system that could strike a conversation with a human being? or if you were asked to build something that could recognize a human face or an object? That would be a lot of work to do if you were to start from scratch. Moreover, you would need to have an in-depth understanding of the machine learning algorithms. AWS RoboMaker abstracts the complexity for developing such applications.

Robotics Operating System (ROS) provides developers the libraries and API to develop apps. A more in-depth tutorial on using ROS can be found here. Amazon provides cloud extensions that integrate with AWS services like Amazon Kinesis Video Streams for video streaming, Amazon Rekognition for image and video analysis, Amazon Lex for speech recognition, Amazon Polly for speech generation etc. You can use Amazon Kinesis and Amazon Rekognition to build a computer vision application that offloads compute resources to the cloud. By providing a stream from Amazon Kinesis Video Streams as an input to Amazon Rekognition Video, you can perform facial recognition against collections of up to tens of millions of faces that you provide with very low latency. Amazon Lex provides high-quality speech recognition and natural language understanding, plus intent chaining, so you can simplify complex conversations directed towards the robot by breaking them into smaller components. For response and speech generation, Amazon Polly includes dozens of lifelike voices and support for a variety of languages.

Simulation is used to understand how robotics applications will act in complex or changing environments, so you don’t have to invest in expensive hardware and set up physical testing environments. Instead, you can use simulation for testing and fine-tuning robotics applications before deploying to physical hardware. RoboMaker simulation is a fully managed service that enables you to run simulation jobs without provisioning or managing any infrastructure. RoboMaker simulation is integrated with the open source Gazebo (simulation engine), along with the ODE engine for physics and OGRE engine for rendering. Once an application has been developed or modified, you’d build an over-the-air (OTA) system to securely deploy the application into the robot and later update the application while the robot is in use. AWS RoboMaker provides a fleet management service that has robot registry, security, and fault-tolerance built-in so that you can deploy, perform OTA updates, and manage your robotics applications throughout the lifecycle of your robots.